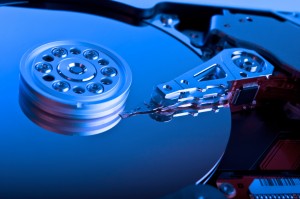 It's a data recovery myth that's as old as the original hard disk drives: freezing a damaged hard disk drive can help restore lost data. Unfortunately, if it was ever true, it's not anymore. Freezing a damaged hard drive can create further damage, making it more expensive, time-consuming and risky for data recovery specialists to recover the lost data, after your do-it-yourself tactics have failed.

Think about it: a freezer is filled with ice and condensation, two things that typically are not good for electronics.

But let's explore the origins of this data recovery myth.

Back in the early days of hard drives, a common cause of hard drive failure was the spindle becoming misaligned and refusing to spin. Freezing the components of the drive could shrink these delicate parts slightly -- just enough to get the spindle back into action, at least long enough to access data and transfer it to a new, fully-functional hard disk drive (HDD).

Today's drives, however, are built to more exact standards and a shift of just a micron between the head and platter is likely to cause more damage. And that's not even taking into consideration the corrosion, rusting and electronics damage that can be caused by freezing a hard disk drive.

If you have a failed Solid State Drive (SSD), increasingly common in today's laptops, netbooks and tablets, freezing your SSD is certain to do more damage.

What To Do With a Failed Hard Drive

The more time that passes between the failure of a hard drive and professional data recovery, the lower the odds of successfully retrieving lost data.

WOW... fantastic customer experience!  Submitted a totally dead 1TB drive for recovery yesterday now its fully recovered before noon the next day!  Exceptional customer service, and impeccable reputation.  Thank you 24 Hour Data, ever so much for getting my valuable data recovered and back to me. Very reasonable rates. My hat goes off to the BEST data recovery service in Dallas or in the country for that matter! You will not be disappointed using their services....
Mark Davis
Bear Technologies