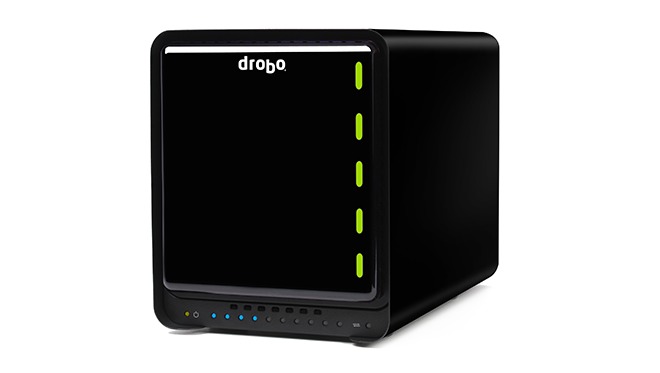 If you're unfamiliar with the term, Thunderbolt is a “lightning fast” (get it?) protocol for data transfer. Drobo has introduced the 5D, a “Bring Your Own Device” desktop storage device that holds up to five hot-swappable 3.5 inch hard disk drives, offering two Thunderbolt ports and one USB 3.0.

Its little brother, the Mini, holds four 2.5-inch hard disk drives in a unit that weighs less than three pounds fully loaded. The Mini also has two Thunderbolt and one USB 3.0 port. Five LED strips across the front of the unit warn users when a drive is failing or is nearing its capacity.

A Drobo hard disk storage device like the D5 is similar to a RAID controller, offering the redundancy of RAID with a few added benefits.

Drobo's BeyondRAID technology permits users to add storage capacity without changing RAID levels or re-initializing the entire array. All drives are hot-swappable, so you can switch out a 500GB drive for a 1 TB, or even switch an HDD with a solid state drive for the best in speed and capacity. Both the D5 and the Mini accommodate today's state-of-the-art hard disk drives from all major manufacturers like Lacie, Seagate and Hitachi, as well as Solid State Drives.

A Drobo storage device is not actually a RAID controller but, in many aspects, it performs as one. If the drives in your Drobo should fail, and you require emergency hard disk drive data recovery, you may need expert help to restore your data.

A number of things can happen when using a Drobo storage device or any RAID array, for that matter:

- You or your IT staff may not have the device set for dual-disk redundancy, so if two or more drives fail, you could lose mission critical data

- Although all Drobo storage devices are equipped with battery back-up in the event a power surge or power outage makes it impossible to access your data, you may not be able to copy your data before power runs out.

- The hard drives in your Drobo array, as with any RAID array, are susceptible to power surges that can corrupt mission critical files, accidental deletion and viruses.

Fortunately, in the event one or more hard disk drives in your array fail, making a “hot swap” is easy with Drobo, which means even less downtime as you call 24 Hour Data to restore your lost data.