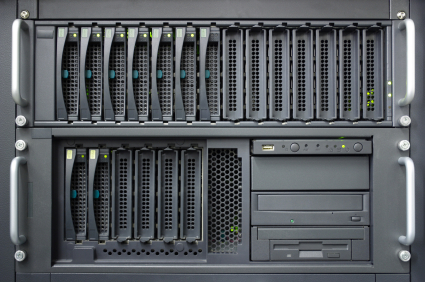 A RAID array can offer a boost in performance, an enhancement in storage capacity or greater data stability through redundancy, at a lower cost than using separate drives.

Depending on which level of RAID array you choose, you'll either get enhanced performanced and redundancy or enhanced storage capacity, but a few levels, including RAID 4 and RAID 5, offer benefits in all aspects.

RAID 4 and RAID 5 arrays achieve better stability and security of data through a process called parity. Parity is sometimes confused with the mirroring that takes place in a RAID 1 array, where the contents of the drive are duplicated on a second drive. In a RAID 1 array, if one drive fails the array can go on, business as usual.

Parity saves money by providing the same level of redundancy as mirroring at 1/20 of the cost on a five-drive array. This drops to 25 percent if you use four disks, and 33 percent if you use three, but it's still less expensive than the one-to-one added cost of a RAID 1 array. Note that you need at least three drives for a RAID 4 or RAID 5 array, which both use parity. Don't confuse the number of drives with the RAID level.

Instead of mirroring all the data on each disk onto another identical disk, as in a level 1 RAID array, the RAID 5 controller stripes parity data across all the drives. If a RAID disk drive fails, the RAID array controller will re-write the parity across the remaining drives, providing the stability and redundancy that is so appealing in a RAID array.

In a RAID 4 array, parity is confined to one drive in the array rather than striped across all the hard disk drives.

If more than one disk drive fails in your RAID 4 or RAID 5 array, you'll need professional data recovery to reconstruct parity and recover your RAID data.

24 Hour Data employs experts in RAID data recovery for all RAID levels, with recovery success rates that are well above the industry standards. We offer affordable pricing and a free diagnostic within 24 hours of receiving your RAID array.

Click here to learn more about our RAID data recovery processes http://www.24hourdata.com/data-recovery/raid-data-recovery and how we can help you recover lost data from your RAID 4 or RAID 5 server.

Our organization has relied on the staff at 24 Hour Data on numerous occasions over the past couple of years.  The engineers are very thorough and highly reliable not only at data recovery but also in explaining the circumstances that led to the device failures. The staff have always been cordial and service-oriented with me, and I do not hesitate to contact them with questions or needs.  24 Hour Data is a great local resource for us and I highly recommend their services for any data recovery needs.
Brian Wilson
Dr Pepper / Snapple Group