With years of experience in the data recovery field and qualified technicians working around the clock, 24 Hour Data has the technical expertise to handle complex RAID recoveries. The process becomes much more complicated when dealing with a failed hard drive which is part of a RAID array, and this is why it is important for professional, experienced specialists to handle the recovery. 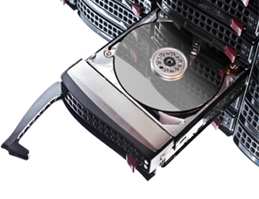 Get a free quote today

At 24 Hour Data we always give a full evaluation and free quote to all of our clients.  You’ll know exactly how much data is recoverable and how long the process will take before making the decision to proceed.

Our customers store all types of data on these advanced drives, and we have successfully performed data retrieval for individuals, small businesses and Fortune 500 companies. We can usually perform a successful recovery operation within 24 to 48 hours. If, for any reason, we cannot retrieve the data from your device, there's no charge for our service.

Our RAID Data Recovery process involves state of the art resources and proprietary technology which allows 24 Hour Data to reconstruct and recover data from all types of RAID arrays.  Our recovery rate on complicated RAID 0 arrays, and all other RAID types is above industry standard and affordable prices.

RAID 0: Striping With No Redundancy

RAID 0 stripes data across multiple drives. RAID 0 is the least secure RAID level since one drive failing will bring down the array. The data is split up in blocks that get written across all the drives in the array. By using multiple disks (at least 2) at the same time, RAID 0 offers superior I/O performance. This performance can be enhanced further by using multiple controllers, ideally one controller per disk.

RAID 1 is the most secure RAID system. Data is mirrored to multiple drives. In the case of a single drive failing you have mirrored data on the second drive. You need at least 2 disks for a RAID 1 array. 24 Hour Data recommends RAID 1 for all 2 drive RAIDs. 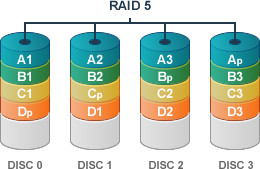 RAID 5: Striping With Parity For Redundancy

RAID 5 is the most used level of RAID. RAID 5 uses larger data chunks. Instead of a dedicated parity disk, parity information is spread across all the drives. You need at least 3 disks for a RAID 5 array. A RAID 5 array can withstand a single disk failure without losing data or access to data. Although RAID 5 can be achieved in software, a hardware controller is recommended. Often extra cache memory is used on these controllers to improve the write performance.

I just wanted to take a moment to express my sincere thanks for the excellent service you provided to Joyce Dayton during our data disaster.  Your dedication and hard work is greatly appreciated. You really went the extra mile to help when it mattered the most!  I will recommend your company to anyone needing data recovery services.
Kris Rhoades
Joyce Dayton Corp.